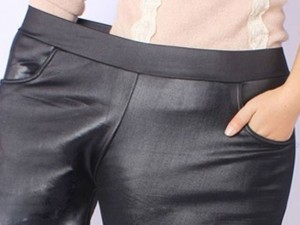 An online  shopping site called wish.com, was recently advertising some plus size leather look shorts at an extremely  low price of only $9. But what  caused some super reactions was how they were modeled on the site.

Unbelievably, they showed  images of a skinny model standing with both legs inside one side of the shorts, making it look like a skirt. What they should have done is find a pluz sized model to actually wear the shorts the way they were meant to look.

A recent article in Cosmopolitan.com.au had this to say:

“The brand of the pants isn’t actually listed on the site – probably just mass imported from China, which is what would make them so cheap – but apparently this isn’t the first time this tactic has been used by the image supplier, Herry He’s.

While the images themselves may not violate any rules of the site, they are just plain rude and insensitive, which begs the question, where do these mass online stores draw the line when it comes to human compassion and common decency? All of that fluffy stuff aside, what about customers just actually wanting to see how the shorts look on a body they were designed for so they can determine whether or not they should actually buy them? It’s all just a bit of a mockery, really

Is it not a standard practice that these types of site check the images before they are published on a site? Cosmo asked the question, “WHAT ON EARTH WERE THEY THINKING”?! While it is true that they cannot always control the way their products are shot, they certainly would have the last say when it comes to what goes live on a site and what does not. How hard would it have been to find a plus sized model to model those shorts?? Or was there more going on?