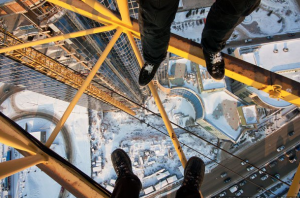 The heart stopping moment two daredevils were hanging hundreds of feet above the ground from one of the largest cranes in the world with one hand has been captured on camera from a nearby drone.

The daring men who choose this over any IT support job or other career climbed up the  skyscraper located in Moscow, which is still currently under construction, with cameras attached to their heads.

They both walk toe to toe across the metal beams used for the buildings exterior before mounting up to the crane.

The cameras that are on the heads of the daredevils shows viewers just how high up they are then they reach the top of the crane.

After carefully making their way along the crane beam and reaching half way, they stop and stand up. Slipping down through the rungs of the crane, the daredevils decide to hang from the bottom.

Whilst hanging from the crane hundreds of feet above the city, the pair then decide to make their way along the bottom of the crane.

The strong men decide to give viewers even more of a heart attack by letting go with one hand to wave at the camera and also doing pull ups.

After hanging there for a while, the pair pulled themselves back through the crane and stand on top of it and look around to take in the impressive view of Moscow.

The drone zoomed towards the fearless pair to focus on them and they just laughed and pointed at the camera.

The impressive yet gut wrenching stunt was completed without the use of any safety equipment to save them if they were to slip and fall.

The video got mixed opinions online from viewers with some stating how the men’s actions were very dangerous and had the potential to lead to a devastating accident if they were to plunge to their deaths from the crane on the skyscraper.

Numerous comments like “I always feel sick watching stuff like this” and “hope they grow out of this before they all learn a hard lesson at the expense of one of their own” were getting thrown around on YouTube from unimpressed viewers.