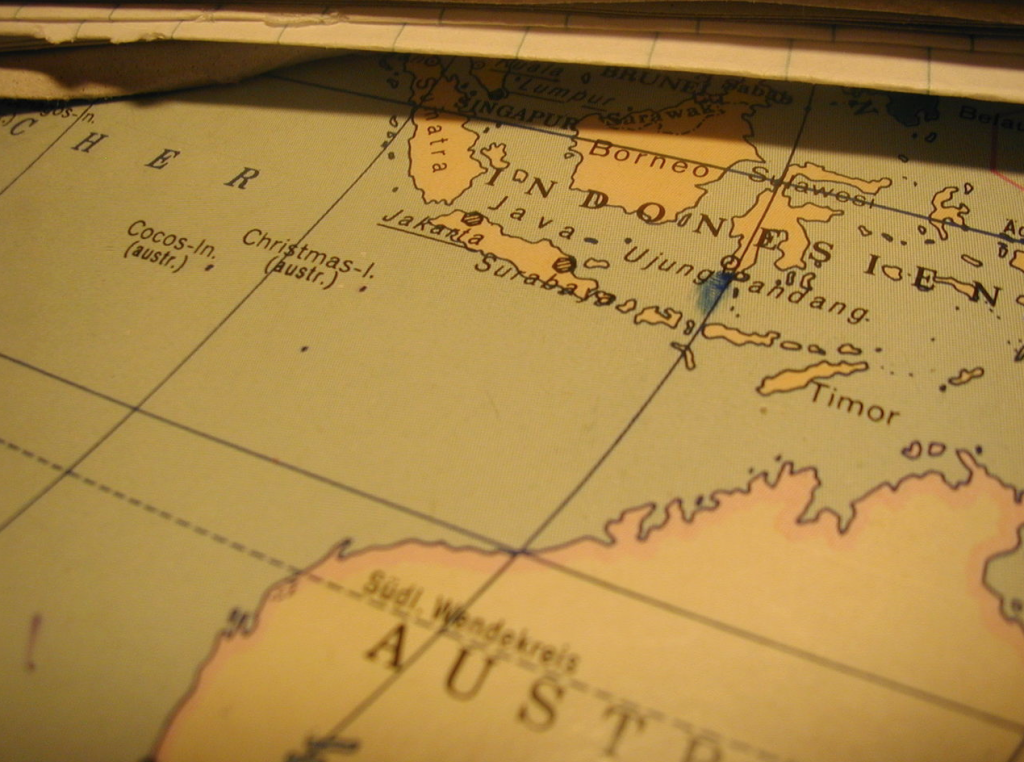 On Monday and down in the Quarantine cellars of the National Library of Australia (“Authorised Persons Only– Heavy Fines Use. Quarantine Act 1908” signs caution) one of the Library’s dearest treasures was getting ready for a journey, with security guards and network security monitoring the maps position 24/7 to ensure its safety..

Archipelagus Orientalis, sive Asiaticus the 1663 map of New Holland was carefully set up in a specially-made-just-for-it vibration-defying cage. These shipping crates and its contents in turn are the precious freight (the only product aboard, and with its own special messenger riding shotgun) on a journey to the University of Melbourne. The map requires some specialised conservation analysis and so it is being sent moving southwards to where professionals await it.

On Monday the library (making us for an hour honorary authorised persons under the Quarantine Act 1908) welcomed us, and the ABC, to enjoy the dramatic placing of the map into its dog crate. Slightly nervous people present included the library’s manager of maps Dr Martin Woods, the manager of preservation services Denyl Cloughley, conservation laboratory supervisor Lisa Jeong-Reuss and Peter Faulkner (we will pertain to his rank and function in a moment). And, fittingly, they were the 4 individuals who reverently raised the huge map (it measures 1185mm x 1520mm) off a bench and installed it in the dog crate, their design reminding one of diligent pole-bearers bearing a casket from A to B.

The map fitted exactly into its inner rack in the cage.

“What if it had not fitted?” somebody wondered.

But absolutely nothing has actually fitted exactly what it was meant for quite so seamlessly since the well-known moment when Cinderella’s elegant little hoof moved into the glass slipper proffered by the Good-looking Prince.

Peter Faulkner, whose work and title everybody on Monday had a hard time to define, is the man who crafts the encouraging artful innards of the crates under the warehouse lighting in which any NLA treasure ever takes a trip. And to call Tuesday’s huge, flat, tangerine-coloured container a “cage” is to do it a severe oppression. It is like calling a Ming Vase a “container” or Cinderella’s crystal slipper a “boot”

To stamp out almost all threats of bad, bad, bad, bad vibrations Faulkner creates crate innards of foam-covered beams and struts specifically shaped pieces of foam. Monday’s crate for the popular map was a masterpiece in its own right. So too are his specially made containers (he showed them to me with quiet pride) for two valuable and fragile worlds of the world that have just come home to Canberra from travels to other Australian exhibitions services elsewhere. Dr Woods believes that of all the things the library ever sends on the roadway these sorts of globes position the biggest product packaging challenges.

Yes, after all they remain in shape and in fragility really like huge, fresh eggs. However Peter Faulkner’s fancy globe packaging’s rise to these obstacles.

Craftsmen who make wooden barrels are called coopers and artisans who make great wheels are called wheelwrights, however Faulkner’s craft, though essential to institutions like the library, appears to have no name. Packagesmith? Wrappingwright? He and his library associates had a lively go at specifying him on Monday, calling him things like “Pete the Home builder” and “Peter the exhibitions go-to man.” On the other hand, as you read this (particularly if you read it on Tuesday morning) Faulkner’s very dog crate and its valuable contents are being carefully rotated down the Hume.

Archipelagus Orientalis, sive Asiaticus (the eastern or Asian island chain), created for the Dutch East India Business by master cartographer Joan Blaeu, terribly requires this coming conservation assistance. The library encourages that “Verdigris, a dazzling blue-green pigment, was used as an ornamental aspect to decorate the surface of the map. However over the last 350 years the pigment has rusted to become a brown crust on the surface, damaging the paper beneath and surrounding the pigment.” Yes, on Tuesday the interesting map (it boasts the first reporting of New Holland and New Zealand in the Dutch language and includes, for the very first time, details of the sighting of Tasmania by Abel Tasman’s crew aboard the Zeehaen on 24 November, 1642) offered an unhealthy, pale greenish tone. It was suggestive of the colour of the cheeks of the poorer sailors amongst those whose trips it served.

It was obtained by the library after being discovered in 2010 suffering in a facility in Sweden where it is believed to have actually invested most of its life. The library obtained it in 2013, with support from the federal government. Specialist National Library staff stabilised it in 2013 so it could safely go on program during the Mapping Our World exhibit, and a crowdfunding appeal for funds with which to complete its stabilisation was extremely successful. That appeal has actually assisted to send it to university and be shown under the spectacular exhibition flood lighting, to the vibrant University of Melbourne where we hope it will arrive late on Tuesday after a vibrationless journey.

The Queensland State Government has made a claim that the massive new electricity business that it has created won’t compete...